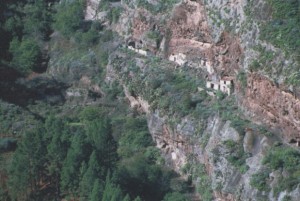 Valleseco has not many arquelological places, but we can find some sites: el Andén Caves, Las Hoyas Caves, El Maipey and El Tablero. El Andén and Las Hoyas Caves are two groups of natural and artificial caves that have been reused as houses and stables. They have been changed and, although they could be used by aborigenes, there is no evidence of that. They are very close to each other in the area of El Andén ravine. El Maipey grave is situated in the dirt track that joins Valsendero and the Cortijo de Crespo through el Andén ravine, near Montaña Pajarita. According to oral testimonies, some human bones were found when this dirt track was made. At present, there are no structures or arqueological remains, because this area has been modified.

In the area known as El Tablero in Caserón, there is a engraving made in corner stone of an old house, which shows reticule-shaped carvings. It has not been dated yet. At present, the Heritage Service of the Cabildo Insular is proceeding to check and update the Arqueological Map of Valleseco. In the provisional document, they have identified 8 arqueological sites: Acero Caves, Masón Caves, Monagas Caves, Aboriginal Engraving in Caserón, Troyanas Caves, El Maipey, Las Hoyas Caves (Andén Caves II) and el Andén Caves.