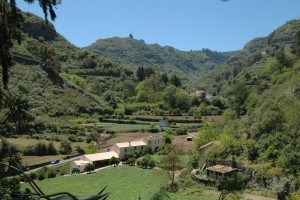 The valley EL Barranco de la Virgen, with its natural landscape is one of the main valleys, which cross the town Valleseco. Because it is surrounded by high mountains, it is in this area where the sound of silence to can still be heard. You can came to this valley it from the Valleseco town center by the GC-305, which leads you to the first section of Valsendero and then continues across the ravine is the last stretch then it's on to the nearby town of Firgas.

As part of the Rural Park Doramas, the Barranco de la Virgen is home to relics of the laurel forest, which once covered the entire interior of the island. Particularly striking is a part of the valley called the Barranco Oscuro (Dark Valley), this valley receives the maximum protection within the directives as set out be the Espacios Naturales de Canarias. The valley is located between steep cliffs,  where the endemic flora is protected by law because much of the flora only exist in this area of the world. La cresta de Gallo (= the Hahnenkamm) / (the chanterelle; Isoplexis chalcantha) and salvia blanca (white sage) / (Sideritis discolor) are two of these unique plants, of which only a few specimens remain.

Because of the water abundance and its most fertile lands, El Barranco de la Virgen soon evolved into a thriving area of agriculture. There were several farms and manor houses built in traditional architecture, which still can be admired today. Remnants of old mills bear witness to this also with their water-related past.

This agricultural wealth and the difficulty of the roads that once connected the area, made the early neighborhood of Valsendero with a shrine in honor of San Luis Gonzaga. The needs of the local land workers call to the artisans for help in their labours. In this area you can still find the work of a traditional basket weavers, who carries out his work in his studio, using only raw materials from his surrounding environment.