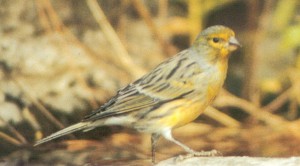 The laurel forest is one of the more diverse ecosystems of our island and which hosts a wealth of interesting endemic faunal. Species that require more moisture refuge in shady areas, hidden under leaves, rocks or logs: earthworms, slugs, snails, spiders, myriapods ... Among insects abundant endemic beetles, earwigs, pseudoescorpiones, grasshoppers , bees and butterflies and moths. Among vertebrates are the birds, reptiles and shrews.

Fewer of the birds carrying the most common are the blackbird, finch vulgar, the alpispa the herrerillo, the robin, the common mosquito net, the swift, the hoopoe. Among the predators are the owl guy, the common buzzard or hawk, the crow, the owl and the kestrel and the peak woodpecker, which lives in the pine forest. In more degraded areas of Fayal-heath, and especially near the growing areas are also some of the above, the Canaries, the verderón, the dunce's cap, the goldfinch or "pinto" and pardillo common or "Linacero".

Among the reptiles, we can mention the lizards (Gallotia simonyi stehlinii) endemic to the island and probably

descended from some North African lizard, and the smooth (Chalcides sextilianus) also features in Gran Canaria.

Group of mammals, sea urchins can be distinguished, which sometimes show in the evening wandering in moderation and a kind of unique to the midlands shrews (Crocidura osorio). More common are the rabbits.

AGUILILA
The common buzzard or Aguililla, "represented a subspecies endemic to the Canary is a bird of prey size that can be observed with some frequency in ravines and wooded areas. Feeds based on rats and rabbits, helping to regulate the populations of these animals.

PICAPINOS
In Gran Canaria, an endemic subspecies inhabits. It is a robust bird with beautiful plumage black, white and red,

which feeds on insects and larvae that live under the bark of the trunk and trapping with his long, sharp beak. Nests in holes dug in the trees, but sometimes takes existing cavities

CERNÍCALO (kestrel)
Is undoubtedly the most abundant bird of prey in the archipelago, with a subspecies on the island itself, which lives from coastal areas to high mountains, but always in the vicinity of rocky Cantilo. Part of their diet of insects, lizards and small rodents, which brings great benefits to agriculture to control their populations. There is a clear sexual dimorphism, with males the head and tail obispillo blue-gray and light brown back with dark spots.

MUSARAÑA (shrew)
It is a small mammal similar to common mice, which unlike the latter, makes a very beneficial for the field, books

invertebrate undesirable. They are aggressive in nature and face their enemies, but the fight is unequal, emitting a strong sound that baffled the attacker. Is widely distributed in the wetlands of the midlands to the north-west, although we must summon up the patience to watch this insectivore in the wild.

The landscape of Valleseco is amazing and offers some of the most beautifull hiking in the world. Do some reconnaissance now with our INTERACTIVE HIKING TRAIL MAP.