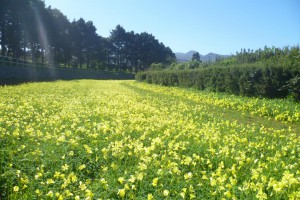 Located within the Rural Park Doramas, the recreational area of La Laguna is an area of great scenic beauty formed by a large volcanic caldera covered inside by vegetation and laurel trees. While walking in La Laguna you can see the different trees that make this forest unique in the world. The successive and intensive afforestation are shaping a new laurel forest, which began following the European Project Laurisilva XXI. Basically it's a small lagoon where birds in everything form from small birds such as canaries and alpispas to migratory birds like the heron come to drink .

The Recreation Area is equipped with facilities for BBQ cooking, running water, and tables and benches for outdoor eating under the large chestnut trees. To use the facilities for large groups you need to call ahead to the City of Valleseco (928 61 80 22) to request permission. The amount is € 1.50 per person.

It also has one of the few dirt race tracks on the Island located around the perimeter of the enclosure in which horse races are held in summer and during the holidays. Below the Pico de Osorio is a hostel the Aula de la Laurisilva, with capacity for 50 beds and facilities offering guideed activities in nature such as: hiking, environmental education workshops and traditional games, tirolinas, interpretation of the laurel, guidance. To the left of the Recreation Area, a viewpoint allows you to observe much of the Rural Park Doramas, punctuated by towns of Valleseco, Moya, Firgas, etc.

If you continue along the road adjacent to La Laguna, you will soon arrive at the unmistakable viewpoint of the Pico de Osorio, a former volcanic crater that rises majestically to 968 meters high, allowing you to contemplate the surrounding towns of Teror, Firgas, Arucas, and further to the north all way to the capital, Las Palmas de Gran Canaria. The entrance to the path that ascent to the summit is found to the right, hidden among Zarzal, just where the road makes a curve. The slope of ascent encourages you to stop from time to time to take in the scenic beauty, thanks to the intense work of reforestation, that sought to recover the endemic vegetation and restore the "fayas" heath and laurel, and other endemic vegetation.